The famous movie “Around the World in 80 days” might have fuelled my imagination about the Hot Air Balloon Flight and we immediately booked for a Hot Air Balloon Flight over Masai Mara when we finalized our Safari trip to Masai Mara, Kenya in October, 2013!
It was 19th October, 2013 and we all assembled at the lobby of Mara Serena Safari Lodge at 5:30 AM. Captain Chelle…a handsomely built and very beautiful, middle aged lady...was our lady pilot…only one in Kenya!
Beside our Captain, we were fifteen and we all started in two land cruisers for a fifteen minutes’ drive through the forest towards a clearing where the Hot Air Balloon is being readied by Captain Chelle’s assistants.
Dawn is the best time to spot animals particularly the carnivorous and we were immediately rewarded by sighting a pride of Lions (more than five) at a distance!
Hot Air Balloon ride is a tricky affair! The basket which carries the passengers is made out of stainless steel pipes, woven with cane and properly padded to avoid injury during the flight and of course during the landing. It is subdivided into five compartments …the central one for the pilot which also houses all the controls and the gas cylinders and two passengers’’ compartments each on either side. The central compartment is having a raised frame at the center where four burners each fitted with individual lever operated manual control valve, are bolted. There are two flaps made of heat resisting steel on either side of the central frame to protect the passengers from escaping hot air and the heat radiation from the burners. Each passenger compartment is provided with a padded seat with hand-holds…to be used during landing.  The depth of the basket is about 5 ft and everybody needs to be standing during the flight for better viewing.
The basket is connected to balloon-canopy, made of parachute material, through guy ropes.
Before the flight the basket will be resting on one of its longitudinal sides and the balloon-canopy is filled in with hot air ( air is blown in and then heated with the necked flames of the four burners). The balloon-canopy then slowly rises from the ground and makes the basket vertical (i.e. resting on its bottom). Pilot and the Passengers will then get inside their respective compartments through foot-holds provided on the side of the basket.
The basket is then lifted off the ground by heating up the air and steered through controlling the burners. Normally the cruising altitude is about 300ft for better viewing of the animals. The drifting speed is about 25 Km/Hr. For a trained pilot like Captain Chelle it is possible to keep the Balloon stationary as well as moving it in any direction during the flight. Balloon is not operated during rain, storm or high wind.
Landing is really tricky. Pilot remains strapped to her / his seat and all the passengers must be on their seats holding the hand-holds. The basket is landed on its bottom side with a series of bumps and then dragged and finally settles on its side. Passengers then come out of their individual compartments in horizontal condition!

Tail piece: After the flight we were all served with Champagne, followed by a heavy breakfast in the bush! A certificate that we have successfully undertaken the balloon flight was also issued during the evening. When I asked Captain Chelle whether I may now apply for flying balloons, she said yes but not in Kenya! Next time you have a smooth sailing in a balloon outside Kenya, please check who is in control! 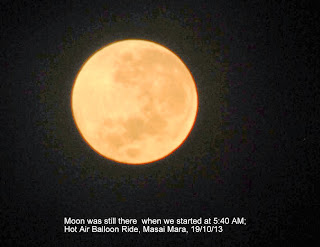 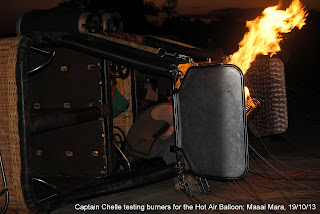 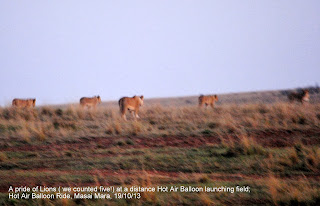 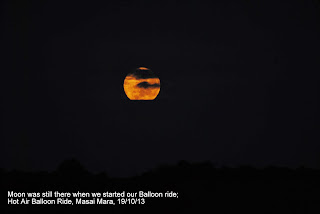 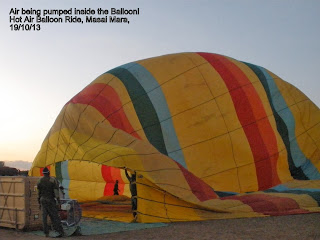 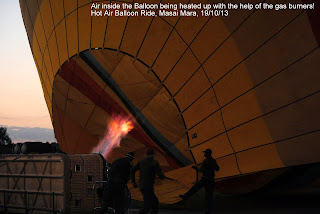 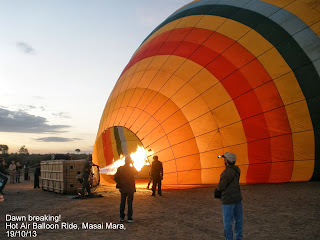 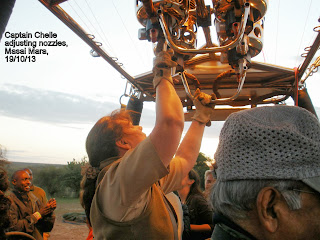 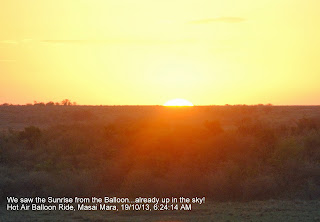 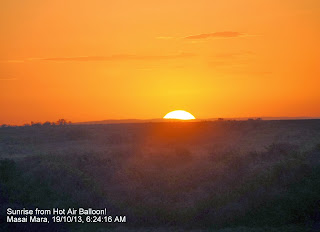 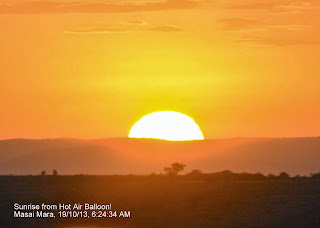 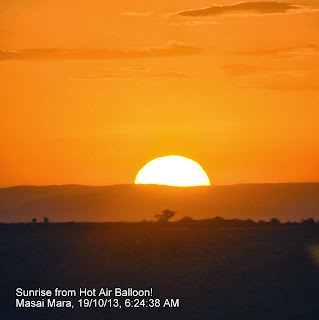 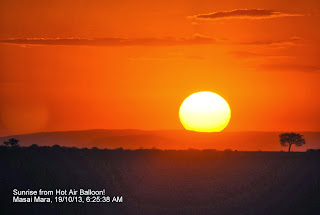 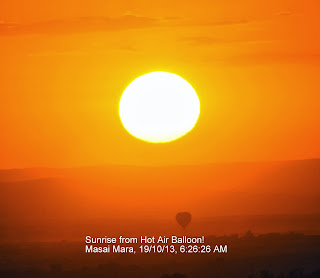 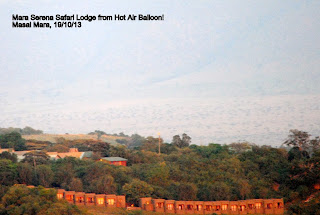 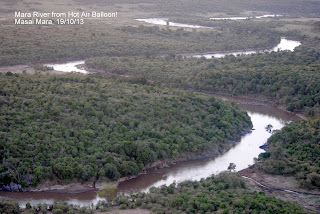 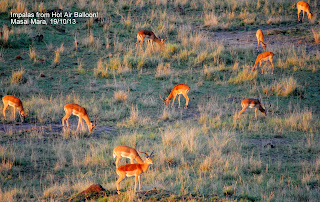 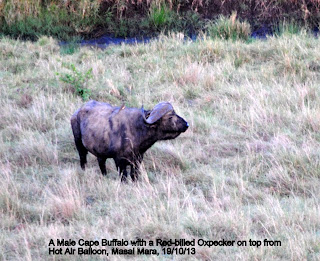 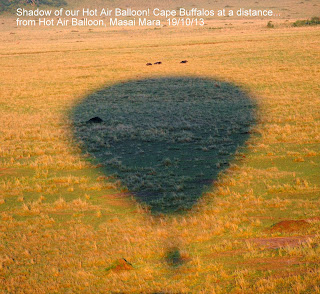 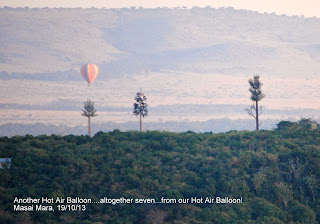 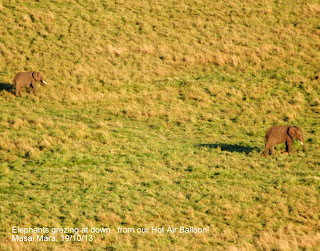 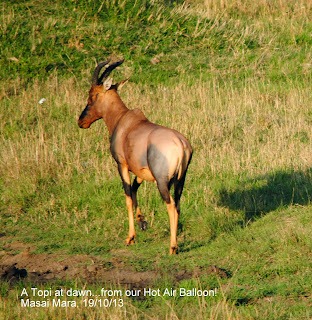 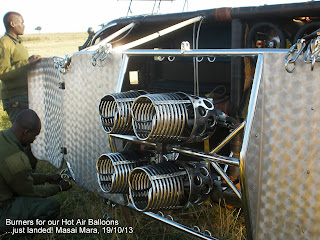 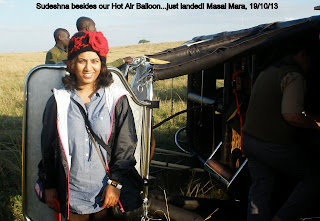 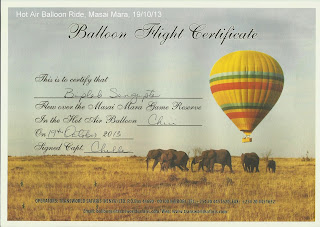 biplab
Nothing really much to write home about. At the age of seventy five, i still have not become a superman and have to put one leg at a time to put on my trousers! I have just enough education to fool people in believing that i may be well educated. I had three women in my life who individually and collectively controlled my whole life. My wife after marriage teamed up with my mother to prove all the TV serials are wrong. My daughter joined the other two very fast and formed the three musketeers in my life. I really had twenty wonderful years of married life and made GOD jealous. HE took away my wife in retaliation in 1998. My daughter left me for USA in 2001 when she was hardly twenty! Before anybody could find out my actual worth i retired in 2007at the age of sixty-one with lots of crocodile tears all around! I could hardly enjoy one year of my retired life with my mother in Calcutta, when GOD became jealous once again and took away my mother in 2008 to end a chapter in my life! I now enjoy my life in solitude with wonderful memories, spending time with my siblings and friends as well as talking to my daughter in USA at least twice a day!