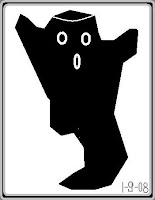 Ajit wanted an early release and left us within two days. We were quite low after Ajit’s departure due to the loss of a good friend and a gossiping partner. Next Sunday at breakfast, while Santosh was having his favorite Alu Paratha (stuffed Indian fried bread), Yogurt and Pickle, I broached the subject.

“Other day Muralidas told me that the so called haunted house will be renovated and offered to the willing bachelors who are not superstitious. He asked me whether we are interested,” I said casually.

Santosh was relishing his Alu Paratha and did not say anything, though I knew he was all ears on the subject.

“I told him that it is OK with me. But I can not take a decision without consulting Santosh who could be superstitious” I added, expecting a violent reaction.

“Partner (his usual address) how could you say that? I am never superstitious!” Santosh was pained. “Tell Muralidas by tomorrow itself, before he talks to anybody else, that we are interested” Santosh was quite empathetic.

Primary goal thus achieved, I immediately switched the topic, lest Santosh’s animosity towards Muralidas got the better of it and he backed out.

Early next day I contacted Muralidas to give him our consent.

“Good Morning, Mr. Muralidas; Biplab here. Finally I could convince Santosh although it took a lot of persuasion. You must give me kudos for it!”

“Good Morning, Mr. Sengupta! I am really thankful to you” Muralidas was overjoyed

“The house, however, really looks haunted. Hope you will restore it before we move in?” I suggested.

“Oh! Mr. Sengupta! Please don’t worry. I will definitely bring it to its original shape and give it a fresh coat of paint. I will also restore the lawn and the kitchen garden” Muralidas replied with all sincerity.

That afternoon we found a platoon of estate workers working on the house. Within a week it was brought to such a magnificent state that I was wondering whether Mr. Muralidas really had a change of heart. Perhaps he really wasn’t as bad as we had always thought (which was rather difficult to believe) or maybe he was instigating the ghost to take retaliatory action on us immediately on our arrival!

The news that we were moving to the haunted house spread like wild fire and became the main topic of discussion in our club for the next few days. All our Bhabis were against our decision. Even our bosses were worried.

Anyway, we managed to maintain a brave facade although we had prayers on our lips when we finally moved into the haunted house within a couple of days along with “Bandhu” our man Friday.

Bandhu was a middle-aged tribal. With his salt and pepper cropped hair, half-grown beard, four jutting out crooked front teeth, a short dhoti above his knees and a flapping kurta on top, he used to give the impression of a moving “Scare Crow”. Work wise, however, we didn’t have much to complain about.

The bungalow was really magnificent! It was slightly below the road surface. A cemented pathway led to a huge Iron Gate on the left most corner. There was no street light on the arterial roads and the ornamental gate lights (maintained by the estate department) provided a mysterious halo only near the gates. A graveled drive way extended up to an open garage. Just by the side of the garage there was a small swimming pool. A cemented three feet wide footpath encircled the whole house. There were two big bed rooms with a very big drawing cum dining hall with separate servant’s quarters. The roof was slightly slanted towards the rear for the better drainage. The lawn in front was quite big. The kitchen garden at the rear was even bigger with an assortment of big fruit bearing trees like mango, jack fruit, jamoun and a very big guava tree with branches covering a part of the roof. The barbed wire fencing at the rear was also the boundary for our colony. Between the fencing and the highway there was a forest land about three hundred meters deep.

Nothing happened for the first couple of months except our mess bill went up quite substantially, which, we guessed, could not be attributed to supernatural involvement. We discussed the same with Bandhu who could not give any proper explanation except attributing it to general price rise.

After breakfast we used to walk down to our office which was about a kilometer away.

That day we both started for our office together but halfway down I realized that I left an important file at home.

“Santosh, I left an important file at home and must fetch it. You please go ahead. I will meet you in the office” I said and hurried back.

While entering the house I heard some noise inside! Bandhu opened the door with a surprised expression. Entering the main hall, I found at least eight to ten kids, eldest may be around fifteen along with a very fat lady were having a great feast. I did not say a word; just collected my file and left.

During a tea break, I informed Santosh about the episode.
“Partner, what Bandhu did is unpardonable. We are already paying Bandhu more than the standard rate. Even when we asked for his explanation for the higher mess bill, he did not tell us the truth. I know, you may be feeling bad, but we must sack Bandhu immediately” said Santosh after thinking for some time while smoking.

We had an unwritten understanding that one will always support the other on such issues and hence the decision was taken immediately. When we came home for our lunch, we released Bandhu after paying him a suitable compensation. Bandhu probably could understand his fault and did not argue.

Same day Santosh went for a tour to Calcutta in the evening.

While returning from office, I went to club for a game of billiard and returned to our bungalow around eight in the evening. The whole house was dark since there was nobody to switch on the lights. While I was opening the gate it made a creaking sound and then I saw a dark figure in white clothing coming from the rear side of the bungalow! I froze! [To be continued]
Posted by biplab at 3.9.08

indra, we were also not happy sacking bandhu, but it was also true that his release did play a part. wait for the next part

jdrhere, i am not even five point someone. how do i scare chetan bhagat?

jdrhere, thanks for the encouragement. normally inspiration for writing comes early in life. sixty one could be too early for the next life. though my life was full of incidents ... good or bad, i did not keep any notes since i never thought of writing. let me see how it comes through during the next few months

I am a ex-Kansbahalite and now in Dubai, since 1994.The "haunted house" made a good reading. I only wished you had been little more kind in sketching Mr Muralidas, after all you were colleagues.

Mr Muralidas passed away some time back, and his daughter Deepika is married and settled in Hydrabad.

Thanks for your advertising. Keep writing - you write well

SPS, I know about the sad demise of Muralidas and Deepika's marriage (to one of my colleagues' son)but i have tried to project the characters to the best of my knowledge. before 1967 when L&T took over the management, UTMAL was under German management when the people under deputation from Germany were mostly indulged in hunting and other activities/ affairs not related to the well being of the company. Their cronies who were heading most of the auxiliary departments really gave us hell when we joined from IIT in 1968. Please note all your colleagues need not be your friend and some of your friends could be your nemesis. In deference to your comments, however, i have edited a word which could be termed offensive.